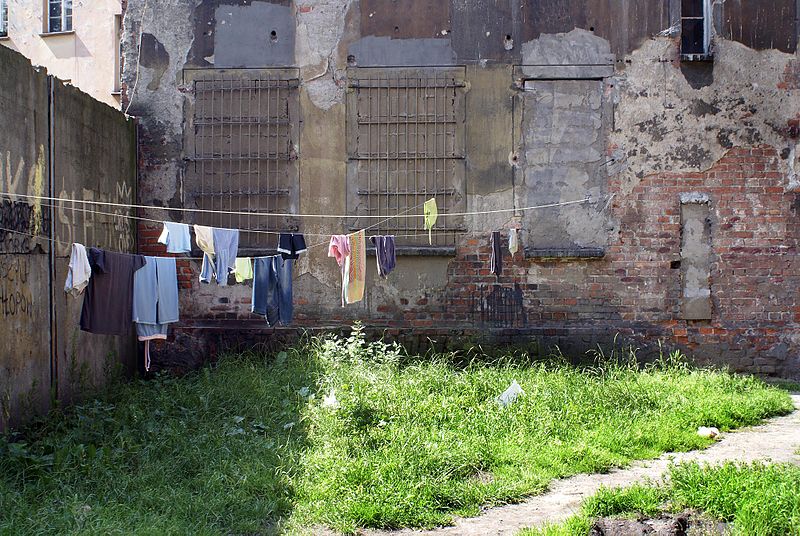 Today is more personal — and tangential.

Below is a little piece I wrote 25 years ago, a few years after my arrival in the US. I was reminded of it yesterday while reading an article in the NYT Magazine, An American in a Strange Land, by Jim Yardley who came back to the U.S. after years of work-related absence and realized he did not recognize his country. The article is direct and piercing. Also, depressing. Its alternative title could have been “Inching Toward Dystopia.” Or maybe “lurching” instead of “inching” toward a new, Hunger Games-like reality, soon to come to a suburb near you.

Reading the (much worth reading) comments there, I came upon the term “displaced person” applied to Yardley. It has much significance for me, for many reasons, some of them more clear than others.

Apart from that, and maybe even more so, the thread that tangentially connected in my mind the NYT piece and my little vignette is the recognition of the dark alienation that’s enveloping America, with the intensifying, though not well (if at all) articulated, sense of displacement that grows within and among its citizens who no longer recognize their country as their home, nor feel as though they belong in it.

I remember this mood — stemming from seemingly very different conditions — all too well as we escaped Communist Poland when it was just the darkest (as I thought for a long time), shortly before the fall of the Iron Curtain. (The new, capitalist Poland is not necessarily better, from what I see and hear, and in some respects it is worse.)

But even then and there, as hopeless as life appeared, there was a sense of security that’s rapidly eroded, if not completely gone, in today’s America. We were poor and our lives were restricted, severely so in many respects, but we did not suffer the egregious and unforgivable social ills associated with rapacious capitalism: homelessness; unemployment; poor education; obscene inequality; the gnawing and debilitating insecurity that comes from the lack of social supports and human rights like universal health care; and the inevitably crumbling or already nonexistent, in an inhumanely competitive society, human bonds.

This eroding or already eroded sense of security, and the fear it engenders, combined with a growing recognition that the dream of a better life is unattainable for most while a few enjoy unfathomable wealth, and freedom and safety that come with it, create both intense anger and sense of betrayal, and, with time, alienation and hopelessness when the brewing anger finds no outlet.

These feelings then feed the sense of outer and inner displacement that appears to be one of the major forces behind Trumpism, whose motto promises to bring us back home by making it great and welcoming again, as it was supposedly during our early days. Trumpian America’s future greatness is an assurance of homecoming and belonging once again, as one had (if one did) in childhood, complete with a bizarre and cynical pledge that The Leader / Father will make all our dreams come true once we’re there. When we let him, as we should. The unquestioning hope with which his followers cling to this childish promise shows their level of desperation and hints at the extent of their sense of displacement clamoring for a resolution.

Displacement in its many forms appears to be the condition of much of the world today, where masses of people are driven out of their homes and countries, and turned into homeless, and unwelcome anywhere, wanderers against their wishes and will. Refugees flee their homeland to survive; but their flight, as unspeakably harrowing as it is, is accompanied by hope for a better, safer life elsewhere.

When one has nowhere to flee — because, among other things, one was brought up in a (not entirely unjustified) belief that his or her country is the best in the world, THE place where others flee to — yet one no longer feels at home here, hopelessness sets in, and with it, a feeling of alienation, of not belonging, of displacement. It is unbearable and it requires a resolution — thus, in part at least, Trumpism today.

There are possibly positive elements to (the sense of) displacement and feelings it engenders, something my future post will explore. For now, here is, tangentially, my sudden moment of old truth.

It happened in Assertiveness Training. It is ironic that I, of all people, happened to be a co-leader in AT in a psychiatric ward; I could use the group for my own learning purposes. And I did. One of the patients talked about his unhappy childhood, and when describing his strict, domineering father, he used the term:  “displaced person.”

At first I thought I hadn’t heard correctly. What person?  Displaced? What does that mean? Several people rushed in with the answer, “Somebody from a foreign country, a stranger.”

I was shaken. I could hardly wait until the end of the group, and I didn’t remember much of what happened in it after the incident. Displaced. Just like me. Dis-placed. Like disowned. Disabled. Disadvantaged. Dissociated from her past. Disconnected from others. All of a sudden nobody, an alien. Someone out of context. Somebody whose experiences are so strange that they couldn’t even be translated.

How can I talk to others about my past and be understood? How can I describe my childhood to anybody without mentioning podwórko? There is really no word in English to which translate podwórko. The closest one would be “playground,” but it isn’t the same. My podwórko is a dirty space between old houses with a broken swing, a bunch of kids hanging around it; an old coal shed with a loose, shrieking door; old women looking out the windows and chatting about their neighbors; and the overwhelming slowness and feeling that time doesn’t exist there.

If I spoke with my friends from Poland, we would understand each other immediately. We all have them in our memory – our podwórka. They are part of us. Our memory, experiences it contains, is a thread connecting us and giving us a sense of belonging, of togetherness. When one becomes displaced, one has to give up that collective part of herself. And then one loses it. I could try to keep it inside like a precious souvenir and treasure it hoping to pass it someday to somebody else – maybe to my children. Maybe to a stranger who will have enough patience to listen.

A couple of days ago I wanted to tell my son about a cat I had when I was very young. So I started, “When I was a little older than you are now, back in Poland…” And then I realized that he doesn’t know what Poland means. It is just a name to him. He is still too young to even understand a concept of a country, but when he grows older how can I explain to him what it was like to live there? Will he be interested at all? Maybe it will become a distant, exotic place in his mind, an ancient “old country,” a country which language he once learned but decided to forget it, since it was useless.

What values and traditions do I want to pass on to my son – American or Polish? Since I don’t know too much about it yet, I won’t be able to teach him America – he will learn it from others. And because this is his place, the only one he knows, he will become one of “them,” the strangers. (I still make this distinction: us and them.)  Has anybody ever inquired about the loneliness of immigrant mothers?

My adjusting to this still foreign country could be divided in three stages so far.

The first one was related to a tremendous culture shock – everything was so different that not being able to understand, I despised it. I hated everything: food lacking taste and full of preservatives; huge, ugly cars; commercials on TV and in magazines; being called by my first name; the striking omnipresent urge to impress everybody around with one’s possessions and status. My first impression of America was depressing: it seemed to be a country being destroyed by mighty commercialism, and deeply split along the lines of gender, race and class. A place populated by salesmen, where everybody was in the never ending process of buying or selling something with the highest profit, hardly appeared friendly or hospitable. Those temporarily not involved in the selling circuit were busy trying to get in touch with their inner victim.

My perception of America has grown milder with time. I entered the second stage, when I was able to accept the differences. I no longer felt offended when people asked if Poland was in Africa, and told me that our president, Gorbachov, was a really nice guy. (He really was — a nice guy, though not Polish.) I learned to ignore Polish jokes, for my own sake. I even convinced myself that cottage cheese is edible and Fannie Mays taste like real chocolate. I’m still working on bread, milk and strawberries.

I started to see that under superficial friendliness there was a real interest and concern, and often surprising tolerance, even care. And I noticed that I was becoming less critical and cautious, and more concerned about creating my own place in the new environment.

This has led me to the third stage, in which I’m now: insecure and blunt, hopeful and full of doubts at the same time, struggling with forming my new identity. I’m still very critical – I’ve always been; often bewildered and embarrassed, unable to express my ideas and feelings, trying to master the new mysterious language and even more complicated codes of social behavior. I’m still displaced. I have the feeling that I will always be.