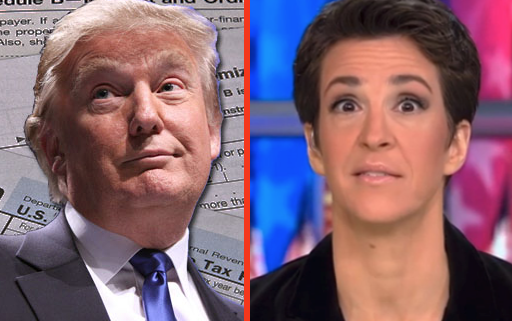 You’ve heard no doubt about this Holy Grail that wasn’t, which is a good example of how our narcissistic media enable the Narcissistic Psychopath in Chief and his march of destruction.

Tuesday evening social media went abuzz with BREAKING NEWS! of Rachel Maddow promising to show everyone Trump’s tax returns. This is her tweet announcing the event:

America, at least its tweeting portion, held its breath for a fraction of a second before unleashing a frenzy of outsized reactions, from announcing Twitler’s imminent demise to awarding Maddow Pulitzer AND The Presidential Medal of Honor (from our future president, should we have one).

On her program, Maddow had David Cay Johnston who explained that the two pages of Trump’s 2005 tax returns were sent to him by an unknown person, and then both of them pondered the significance of this pretty much insignificant document as though it had such.

What’s more, it was likely released by Trump himself — by which I mean Bannon & Co — something that Johnston acknowledged. It came to public attention at the same time as a rehash of Paul Ryan’s disavowal of Trump from last fall. Both “revelations” just happened to coincide with the major s…tuffstorm that’s Obamacare replacement known as #DonTCare, the fallout from Trump’s insane wiretapping accusations leveled at Obama, and his deepening Russia scandal, among several other developments in the TrumpSwamp.

Trump was “outraged” over this breach of decorum and tweet-screamed — you guessed it, or maybe simply saw it — about nasty media with its fake news, which in this case was nearly justified. His son and some supporters thanked Maddow for proving that not only Trump’s willing (yeah!) to share his tax returns, but that they show what an upstanding gazillionaire he is. Oh, and at the same time Trump, via Breitbart, has managed to prepare the ground for his disavowal of Ryancare (a.k.a #DonTCare), to keep his own hands clean when it collapses.

Meanwhile, Trumpists attacked Maddow and Johnston, while anti-Trumpists rose to their defense, praising Maddow for her (kid you not) heroism. A predictable frenzy followed, as it always does when you throw a piece of meat to a pool of piranhas. It will probably continue for the rest of the week, if not longer.

All in all, a great feat of propaganda.

The winners here are Trump, of course (as usual so far), who may not know much but can, with a little help from his friends, effectively manipulate the masses, including (especially) the supposedly hostile to him media; but also Maddow and MSNBC, and possibly Johnston.

Our media and Trump are each other’s nemeses locked in a love-hate relationship. While they profess contempt for each other, they cannot really live apart. Their existence, these days particularly, depends on the other’s attention — Trump’s more on the media’s than the other way around, but still. They are also similar in some crucial respects. Like all narcissists, both prize image over substance and ratings over truth. Ratings equal money, and money is really what matters most to them and close to everyone else on our planet.

But to really matter, both actors in this depressing spectacle depend on a willing audience which always obliges because we, humans, love our narcissists more than we hate them. The 24/7 news cycle has created hordes of addicts consuming the manufactured dramas to fill voids in their lives, provide some excitement, and a fake (narcissistic) sense of importance, along with an illusion of belonging to something greater than themselves.

And as the narcissists on both sides sit back and glory in their soaring ratings and/or throw sludge at each other, cheered on by their armies of minions, we are left to ponder whether we will be able to afford our food AND medicines a year from now. That is those of us who still can, a number growing smaller each day, and one which, under Trump’s psychopathic budget, will soon shrink greatly — and tragically — as our national nightmare deepens.

12 thoughts on “About Those Trump’s Tax Returns”