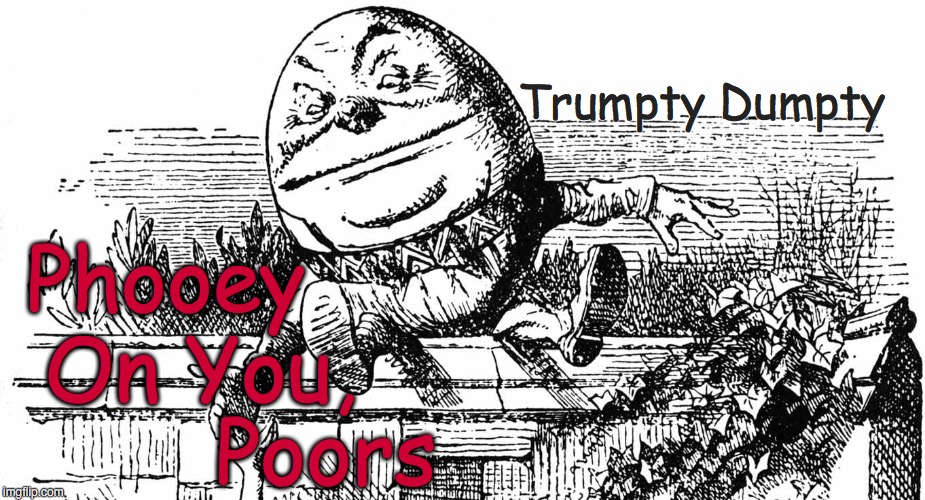 It is Saturday, Day 679 of Our Great Leader’s Ascension to The Throne, which means it is time for another fairy tale*:

Once upon a time, in a land far away, The People elected The Leader who was unlike any other they have seen before — not in Their Land. Other peoples Elsewhere had their share of such leaders time and again, and so they knew what it meant, but The People didn’t and wouldn’t listen to Elsewherians when they tried to warn them. Well, to be accurate, some did — but will get to that later.

The Leader was everything The People wanted and then some. His spectacular and flamboyant daily doings and undoings — though the latter were less visible — mesmerized and occupied The People’s minds and were subject of endless, heated debates.

Some believed the un/doings were exactly what Their Land needed, while Others vehemently disagreed. The chasm between Some and Others grew wider each day, and The People were at loss to understand why.

As time passed, and chaos and violence grew in Their Land and Abroad, what with The Leader’s wars as foreign policy and his desire to show himself The Mightiest Leader of All, more and more of The People started to notice things about The Leader that they did not see before.

He would say unusual things — like, for example, that the sky was purple; and His Henchmen ran into Town Squares and Twitter to assure each other and The People that the sky was as purple as Italian plums.

The People looked at the sky, and even though it still seemed blue to most, they were not really sure now. Because if Everybody sees purple, who am I to question that? went the Average Person’s reasoning.

Or, soaking wet from rain during one of his triumphant, though scary as hell rallies, The Leader would declare this to be The Sunniest Day ever on account of his Magnificent Speech. (#truefact)

He would say that the health care he gave The People was the best, but it was hard to hide any longer that more people than ever were dying from treatable and preventable diseases because they could not afford to see a doctor. Or he said that his job creation programs and environmental policies were Making Their Land Great Again, when more and more of The People found themselves in perpetually jobless despair, unable to find free drinkable water and clear air to breathe. (#alsotruefactsoon, #freemarketrules)

Little things like that started to add up in The People’s minds.

Some also began to notice that as the disorder in Their Land intensified, The Leader’s life and that of His Henchmen grew more lavish and carefree.

It didn’t seem right, but there was no good explanation for what they saw. After all, The Leader was the greatest ever — he said so himself and they believed him, even as their doubts grew in spite of their Proper Judgment (TM).

As it is often the case in such times of confusion in Their Land, The People started to ask, WTF?, and, naturally, turned to The Experts for explanations.

*This is a fairy tale, obvs. So any possible similarities between its characters and situations, and those of actual people and their increasingly wtf-ish reality are purely coincidental, totally unintended, and, seriously, just imagined by you, dear reader. The sky is still pur… blue and the wars have not started. . Now go take a deep breath, if you still can.

Those were difficult times.

The People’s unhappiness and fear intensified as their economic situation stagnated and worsened, and they saw their hopes for the future shattered not only by their dwindling life opportunities, but also by the influx and sometimes prosperity of The Others, the foreigners. There was a growing sense that their country, burdened by excessive international obligations and recent war fiascos, was on the wrong track. It also faced external threats from The Enemy, whose menacing power was a nearly constant drum in daily news and political discussions and speeches.

As it is always the case in such trying times, The People yearned for a savior who materialized, not so much out of thin air, but from the always present class of such leaders ready for their chance: men (almost invariably) who promise to rescue The People and make their country and/or the world great again. The dying dreams of glory could be resurrected, fueled by righteous anger and a desire for renewal and purity in public and private lives.

The Leader ran on the platform of good old-fashioned values — faith, family, prosperity, freedom, and national pride — which resonated strongly with The People who saw themselves as increasingly dispossessed and disenfranchised, with their ways and traditions threatened in those uncertain times. Bold and charismatic, he spoke their language, not afraid to name The Others as the reason for The People’s misery and discontent. The People loved him. His words were simple and free of the complicated jargon of bureaucrats, which endeared his followers ever more to him. He told it like it was. There was no doubt in the minds of The People that this strong, decisive man was exactly what their country and the world needed.

Those who looked upon his rise to power with skepticism and fear, knowing that it spelled disaster, were ridiculed by the masses invigorated by The Leader’s message of revival and his promises of a great future for all. They were called wusses, cowards, or worse, traitors. Needless to say, they were unable to stop it.

The Leader, elected by his faithful majority, took the reins of power to great fanfare, followed by grand spectacles of national unity and strength, which continued for a long time, and as loudly as his revolutionary reforms were implemented in relative silence. His supporters felt prouder than ever. It made sense to them that certain sacrifices should be made to reclaim the country’s strength. (Although one was hard pressed to see those developments as sacrifices, given that they involved those others, the foreigners, and were designed to make their own nation great again.) That was the way to do it. That’s why they elected The Leader.

The rest was history.

Cartoon by Tom Toro from The New Yorker